Circular RNAs (circRNAs) are a new class of non-polyadenylated non-coding RNAs that may play important roles in many biological processes. Researchers from Peking University have developed a single-cell universal poly(A)-independent RNA sequencing (SUPeR-seq) method to sequence both polyadenylated and non-polyadenylated RNAs from individual cells. 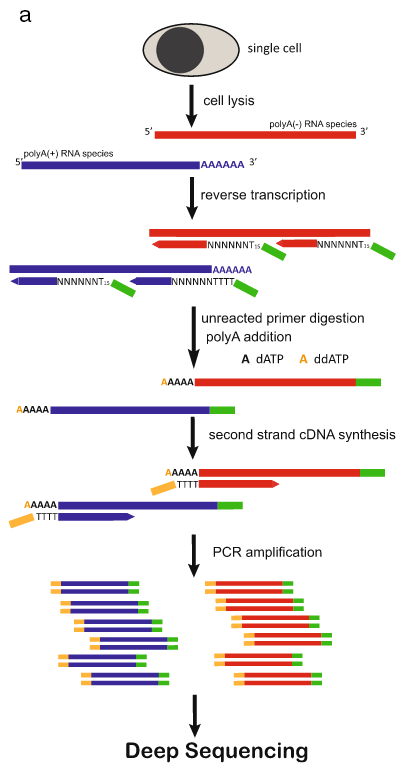 Experimental pipeline of SUPeR-seq, and its sensitivity at the whole-transcriptome scale. – The schematic of SUPeR-seq analysis. A single cell is lysed to release RNAs. RNAs are then reverse transcribed into first-strand cDNAs using random primers with a fixed anchor sequence (AnchorX-T15N6). Unreacted primers are then digested using ExoSAP-IT, followed by adding poly(A) tails to the 3 ends of the first-strand cDNAs using dATP doped with 1 % ddATP to restrict the length of poly(A) tails. Second-strand cDNAs are synthesized using poly(T) primers with a different anchor sequence (AnchorY-T24). Then the double-stranded cDNAs are evenly amplified by PCR using AnchorX-T15 and AnchorY-T24 primers. Finally the purified single cell cDNAs are used to prepare sequencing libraries following Illumina’s TruSeq DNA sample preparation protocols.

This method exhibits robust sensitivity, precision and accuracy. They discovered 2891 circRNAs and 913 novel linear transcripts in mouse preimplantation embryos and further analyze the abundance of circRNAs along development, the function of enriched genes, and sequence features of circRNAs. 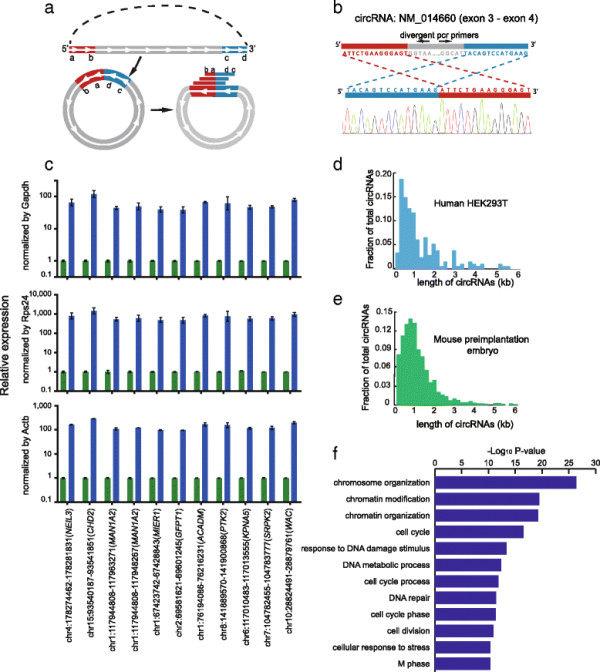 Detection of circRNAs by SUPeR-seq in individual HEK293T cells and mouse preimplantation embryos. a Identification of circRNAs in the SUPeR-seq dataset. The termini of two exons are in a sequential order (a–-b……c–-d) along the genome, the redpart shows the upstream exon at the 5′end of the gene while the bluepart shows the downstream exon at the 3′end of the gene (top). When looped, the two exons join together from head to tail in a reversed order (c–d–a–b, bottom). Various sequencing reads covering the junction site can identify the cyclization of a circRNA. b Sanger sequencing validation of a newly discovered circRNA through SUPeR-seq in a single HEK293T cell. The end-joining region of the circRNA is PCR amplified to confirm the reversed order of the joined exons. The sequence of the end-joining region is unique to the circRNA but not the host linear RNA. The joint region of the circRNA is chr7:11021999–11030474, and the host gene is PHF14. c Quantitative RT-PCR of HEK293Tcell total RNA treated with RNase R or mock treatment as a control. The circRNA candidates showed ten- to hundred-fold enrichment compared with common linear mRNAs after treatment with RNase R (here we use Gapdh, Rps24 and Actb as linear RNA controls). This clearly demonstrates that all the circRNA candidates are circular. For each circRNA, we made two replicates in the RT-qPCR step. d The length distribution of the circRNAs (141 in total) detected in single HEK293T cells. e The length distribution of circRNAs (2891 in total) detected in mouse preimplantation embryos. f The top GO terms are displayed for 1316 genes from which circRNAs are generated in mouse preimplantation embryos.

This work is key to deciphering regulation mechanisms of circRNAs during mammalian early embryonic development.