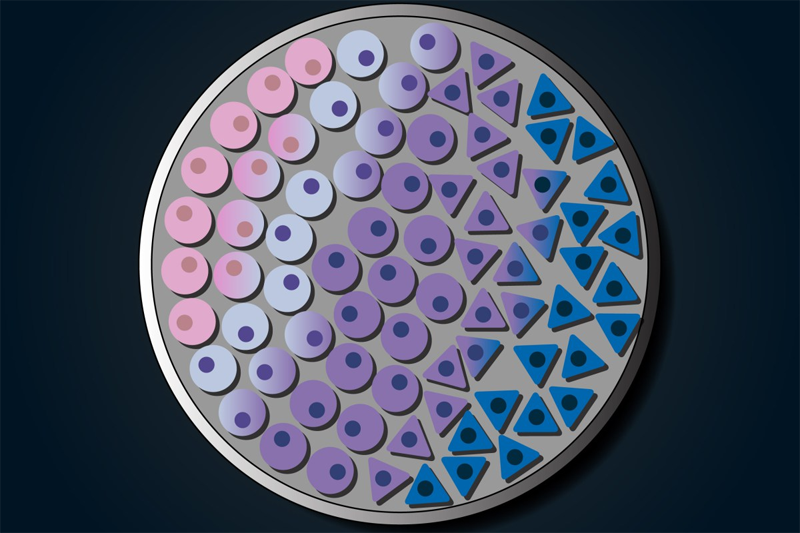 Cell lines form the backbone of cancer research. These individual groups of cells, typically collected from patients’ tumor samples and cultured to grow indefinitely in the laboratory, enable everything from basic genetic research to drug discovery.

But while scientists have thought that individual cell lines remain genetically uniform even as they continue to grow and divide, they can in fact evolve in ways that dramatically change their responses to drugs, say researchers from the Broad Institute and collaborating institutions. This continuing evolution of cells within cell lines — potentially driven by the laboratory conditions in which they are grown — may help explain why different studies that use the same cell lines often have conflicting results.

These findings, reported in Nature, suggest that scientists need to take extra care to ensure that cell line-based models of cancer accurately reflect the tumor they are studying. The research team has released an online tool, Cell STRAINER, to help scientists benchmark their models.

“The main message here is not that cell lines and culture-based models are bad. Rather, you should know your model, and understand its properties and limitations,” said Broad founding core member and Cancer Program director Todd Golub, who was the study’s co-senior author, along with Broad associate member and Dana-Farber Cancer Institute (DFCI) adult neuro-oncologist Rameen Beroukhim. “Knowing requires a level of genetic and genomic characterization beyond what we usually think about. Skipping this sort of careful characterization is not an option.”

Evolution in a lab dish

Researchers have long recognized that cell lines do not perfectly mimic their tumors of origin. Still, they are considered representative and stable enough to provide accurate insights into cancer biology and drug response. In fact, every cancer treatment available today was at some point tested in these laboratory models.

However, scientists often struggle to reproduce study results from cell lines. In addition, no one has yet undertaken a systematic effort to measure how and the extent to which the cells in cancer cell lines change genetically over time, and whether those changes affect drug responses.

“You can find many examples in the literature pointing out inconsistencies in drug sensitivity data from cell-line experiments,” said Uri Ben-David, the study’s first author and a postdoctoral fellow in the Golub lab. “We wanted to look for signs of evolution and connect the dots between changes within lines and those inconsistencies.”

The researchers first began to suspect that these cell lines evolve when they reanalyzed sequencing data from 106 lines housed in two large collections: the Broad-Novartis Cancer Cell Line Encyclopedia (CCLE) and the Sanger Institute’s Genomics of Drug Sensitivity in Cancer. These lines should be genetically identical in both collections, but the team found high levels of variability. For instance, 19 percent of the genetic mutations the team found were present in only one collection or the other.

The team then ran deep molecular analyses on 27 and 23 strains, respectively, of two widely used cell lines: the estrogen receptor-positive breast cancer line MCF-7, and the lung cancer line A549. The analysis included whole-genome DNA sequencing, targeted DNA sequencing of nearly 450 genes commonly mutated in cancer, and bulk and single-cell RNA sequencing. Each of the strains represented a batch of cells from the line with a distinct history (e.g., different kinds of lab manipulation, different length of time in culture, different original source).

Their data revealed striking genomic differences between strains, ranging from single base pair mutations to large-scale changes in genome structure (e.g., losses of entire chromosome arms) to major changes in gene expression — all indicating that the cell lines were neither as stable nor as identical as researchers thought. These genetic and expression differences also affected the strains’ growth rates, cell size and shape, and other traits. 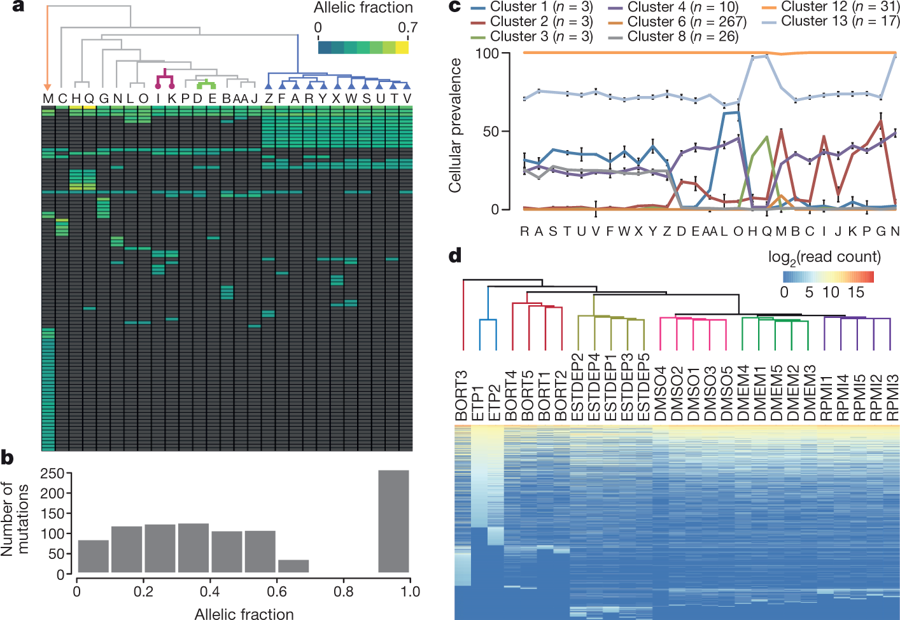 a, Top, unsupervised hierarchical clustering of 27 MCF7 strains based on the allelic fractions of their non-silent SNVs. Colours as in Fig. 1. Bottom, corresponding heat map of the allelic fractions of non-silent mutations present in a subset of the strains. b, The distribution of allelic fractions of non-silent mutations across strains. c, The cellular prevalence of mutation clusters across MCF7 strains identified by a PyClone analysis. Mutation clusters with differential abundance (a difference in cellular prevalence (ΔCP) > 0.15), the clonal cluster (cluster 6; CP ≈ 1 in all clones) and a cluster unique to MCF7-M (cluster 12) are shown. n = mutations per cluster, data are mean ± s.e.m. d, Top, unsupervised hierarchical clustering of 27 samples of DNA-barcoded MCF7-D based on barcode representation. Dendrogram branches are coloured by culture condition. Bottom, corresponding heat map of barcode representation. ETP, early time point; RPMI, RPMI 1640 medium; DMEM, DMEM medium; DMSO, RPMI 1640 with 0.05% DMSO; ESTDEP, oestrogen-depleted RPMI 1640 medium; BORT, bortezomib (500 nM; 48 h exposure) followed by RPMI 1640.

The team extended their findings by carrying out targeted sequencing on an additional 11 cancer cells lines representing a variety of tumor types (e.g., prostate, colon, liver, skin). Across the board, the team found extensive genetic variability within lines.

What drives these changes? By conducting experiments with different laboratory conditions, the team found that even changing the kind of nutrient media in which a cell line is cultivated can give some cells within a strain a growth advantage over others, allowing genetically distinct populations to evolve. And by extracting single cells and growing them in culture, the team also found that the progeny of isolated single cells could spontaneously acquire new mutations — showing that new, genetically diverse populations of cells could arise within a strain from individually isolated cells.

To understand how these genetic changes might affect drug response, the team tested the 27 MCF-7 strains against 321 drugs. Indeed, any given drug’s ability to slow the growth of or kill a strain’s cells correlated with the strain’s genetic features and its expression of genes targeted by the drug.

The findings complement those of another study led by Ben-David, Beroukhim, and Golub that examined patient-derived xenograft (PDX) models, which are generated by implanting tumor cells from a cancer patient into a mouse. In 2017, they reported in Nature Genetics that over time human cancer cells in PDX models lost characteristic genetic features seen in patients and gained new features not encountered in humans, changes that correlated with shifts in the models’ drug sensitivities.

A change in perspective, and an opportunity

Taken together, the findings highlight a need for scientists to understand how the cells they are using may have diverged genetically from their parent line, so as to make accurate comparisons across experiments.

To that end, the study team has developed and will release an online tool, Cell STRAINER, to help researchers estimate how much a cell line strain they use has diverged genetically from reference samples in the Cancer Cell Line Encyclopedia collection.

The team also notes that the cell lines’ capacity for evolution could actually provide an opportunity to study a variety of aspects of cancer biology and tumor evolution.

“Because the strains have the same general genetic background, you could test the same compound on two strains and use their features to study the compound’s mechanism of action, or the influences of gene expression differences on sensitivity,” said Golub, who is also the Charles A. Dana Investigator in Human Cancer Genetics at DFCI. “Or you could investigate tumor heterogeneity and the selective pressures that cause strains to evolve.”