Scientists have discovered that a specific brain cell known as a ‘projection neuron’ has a central role to play in the brain changes seen in multiple sclerosis (MS). 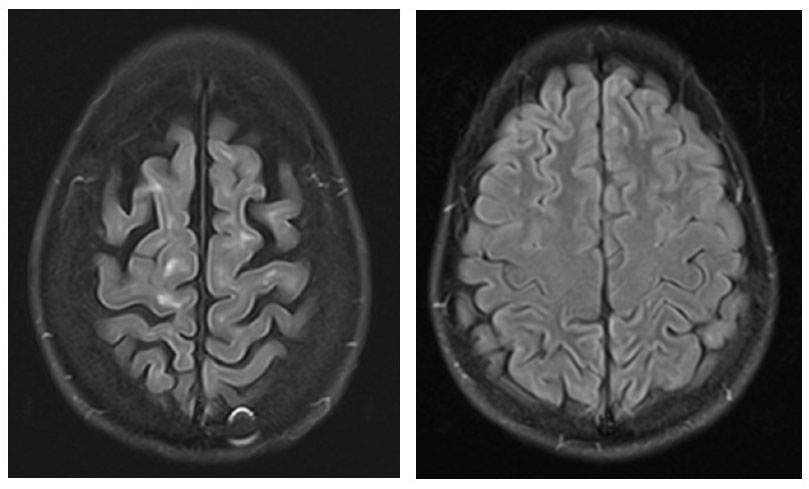 Two brain MRI images, the one on the left from an MS patient with signs of brain atrophy, the one on the right from a healthy brain. Image credit: Prof. Dr. Achim Gass, Department of Neurology/Neuroimaging, University Hospital Mannheim.

The research, published today in Nature, shows that projection neurons are damaged by the body’s own immune cells, and that this damage could underpin the brain shrinkage and cognitive changes associated with MS. These new findings provide a platform for specific new MS therapies that target damaged brain cells to be developed.

Multiple sclerosis is a disease of the brain and the spinal cord that affects over two million people worldwide.  The potential symptoms of MS are wide ranging and can include problems with vision, movement and cognitive abilities.  Previous research has shown that a brain region called the cortex shrinks over time in MS patients, known as cortical atrophy. The processes driving this cortical shrinkage have, until now, been unclear.

“Using a new technique called single nuclei RNA sequencing, we were able to study the genetic make-up of individual brain cells to understand why some cells might be more susceptible to damage in MS than others,” said Dr Lucas Schirmer, lead scientist on the project from the University of Heidelberg.

“Our results showed that a particular type of nerve cell called “projection neurons” were particularly vulnerable to damage in the brains of MS patients.”

In healthy people, these projection neurons are involved in communicating information between different areas of the brain.  It is therefore possible that the damage to these cells can affect cognitive abilities in MS patients. Moreover, the loss of this particular cell types helps explain why brains of MS patients shrink over time – the more cells that are damaged and lost, the less space the brain takes up.

The researchers also showed that immune cells in the brains of MS patients were targeting projection neurons and causing cell stress and damage.

“We found that antibody-producing immune cells are related to the damage of the important projection neurons in MS brains,” said Professor David Rowitch from the University of Cambridge, the senior scientist coordinating the research. “This suggests that cell therapies targeting these immune cells could protect projection neurons and provide a novel treatment for progressive MS.”

Dr Dmitry Velmeshev and Professor Arnold Kriegstein from the University of California, San Francisco worked together to develop the techniques used to analyse the genetic code within the individual brain cells.

“These new techniques have wide applicability in the understanding of human neurodevelopmental and neurological disorders and are providing new insight into not only MS, but also autism spectrum disorder,” said Professor Arnold Kriegstein.

Dr Andrew Welchman, Head of Neuroscience at Wellcome, said: “This study uses state-of-the-art measurements of gene expression to provide a valuable new window onto the process by which inflammation in the brain causes MS to progress. This new insight should stimulate further development of treatments that could freeze the disease in its tracks. It is an exciting advance that attests to the importance of cutting-edge genetic tools in understanding diseases of the brain.”

Dr Bruce Bebo, Executive Vice President for Research at the National MS Society (USA) said: “Research, such as Professor Rowitch’s  on projection neurons in MS brain tissue, contributes to our understanding of the underlying pathology in MS and is likely to lead to better, more targeted ways to stop the disease, protect the nervous system from further injury, and slow down progression.”