It has recently been shown that significant and accurate single nucleotide variants (SNVs) can be reliably called from RNA-Seq data. These may provide another source of features for multivariate predictive modeling of disease phenotype for the prioritization of candidate biomarkers. The continuous nature of SNV allele fraction features allows the concurrent investigation of several genomic phenomena, including allele specific expression, clonal expansion and/or deletion, and copy number variation. 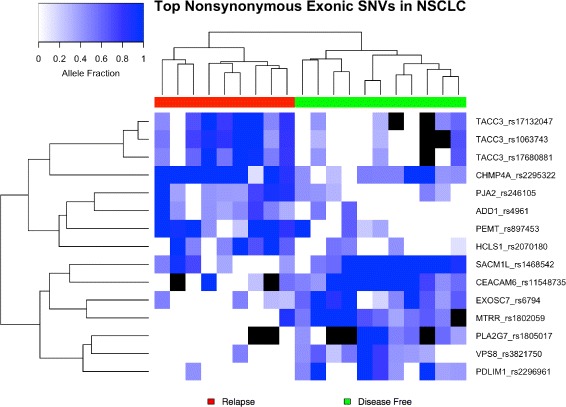 Hierarchical Clustering of NSCLC Exonic SNVs A heatmap demonstrating the distinct clustering of sample groups and the co-occurrence of top nonsynonymous exonic SNV features in the NSCLC dataset. NA values are filled in with black

Furthermore, the utility of the proposed methodology is supported by its comparable performance to traditional models as well as the enrichment of selected SNVs located in genes previously associated with cancer and genes showing allele-specific expression. As proof of concept, the developers highlight the discovery of a previously unannotated intergenic locus that is associated with epigenetic regulatory marks in cancer and whose significant allele-specific expression is correlated with ER+ status; hereafter named ER+ associated hotspot (ERPAHS).