Messenger RNA (mRNA) translation is a tightly controlled process that is integral to gene expression. It features intricate and dynamic interactions of the small and large subunits of the ribosome with mRNAs, aided by multiple auxiliary factors during distinct initiation, elongation and termination phases. The recently developed ribosome profiling method can generate transcriptome-wide surveys of translation and its regulation. Ribosome profiling records the footprints of fully assembled ribosomes along mRNAs and thus primarily interrogates the elongation phase of translation. Importantly, it does not monitor multiple substeps of initiation and termination that involve complexes between the small ribosomal subunit (SSU) and mRNA.

Here researchers from the EMBL-Australia describe a related method, termed ‘translation complex profile sequencing’ (TCP-seq), that is uniquely capable of recording positions of any type of ribosome-mRNA complex transcriptome-wide. It uses fast covalent fixation of translation complexes in live cells, followed by RNase footprinting of translation intermediates and their separation into complexes involving either the full ribosome or the SSU. The footprints derived from each type of complex are then deep-sequenced separately, generating native distribution profiles during the elongation, as well as the initiation and termination stages of translation. The researchers provide the full TCP-seq protocol for Saccharomyces cerevisiae liquid suspension culture, including a data analysis pipeline. The protocol takes ∼3 weeks to complete by a researcher who is well acquainted with standard molecular biology techniques and who has some experience in ultracentrifugation and the preparation of RNA sequencing (RNA-seq) libraries. Basic Bash and UNIX/Linux command skills are required to use the bioinformatics tools provided.

Comparative overview of the TCP-seq and ribosome profiling methods 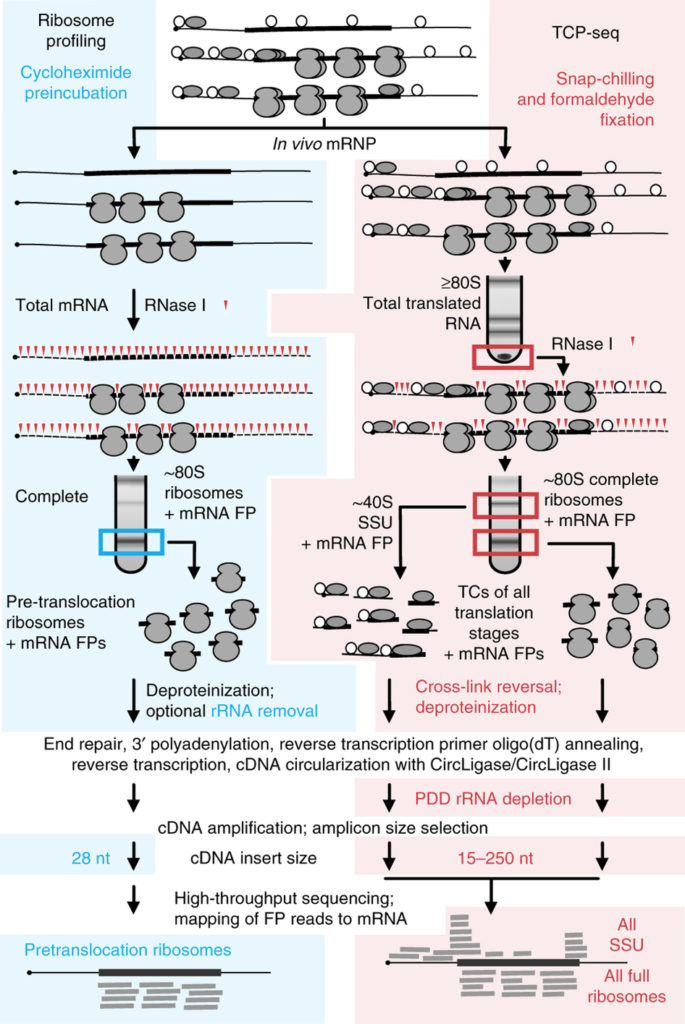 Schematic of ribosome profiling method is depicted on the left, and comparable stages of TCP-seq on the right. Steps with critical differences are highlighted with blue (ribosome profiling) and red (TCP-seq) boxes and explained in the text labels. FP, footprint; mRNP, messenger ribonucleoprotein; PDD, probe-directed degradation.

Availability – The full corresponding software to map and analyze TCP-seq data in a ready-to-use package together with this protocol are publicly available for download at http://bioinformatics.erc.monash.edu/TCPseq/vm/TCPseq.box.