Investigators at St. Jude Children’s Research Hospital and Massachusetts General Hospital, alongside others, have revealed the cells of origin for specific subtypes of medulloblastoma, the most common malignant pediatric brain tumor. The work also has implications for how medulloblastoma is classified, which may eventually shape clinical care. The work appears as an advance online publication today in Nature.

This study is the most in-depth analysis to date of medulloblastoma using single-cell RNAseq technology. The findings shed light on the relationship between the four known subtypes of medulloblastoma. Additionally, the researchers suggest a previously unknown cell of origin for the understudied Group 4 subgroup.

“The ability to look at individual cells has propelled us 10 steps forward in our understanding of how the subtypes of medulloblastoma arise, what drives them and how we can make treatments more effective for patients,” said co-senior author Paul Northcott, Ph.D., of the St. Jude Department of Developmental Neurobiology.

Previous research by the Northcott laboratory and others has classified medulloblastoma into four distinct subtypes: WNT and SHH (which are driven by their namesake genetic mutations), Group 3 and Group 4. Group 3 and Group 4 constitute 60% of all medulloblastoma but are the least understood. This is in part because there are currently no genetically accurate laboratory models that mimic Group 4.

Using tumor samples from patients with each of the four subtypes, the researchers conducted single-cell RNA sequencing. This technique evaluates each cell, providing the investigators with a more detailed portrait of how the subtypes arise and relate to each other. Going beyond traditional genetic sequencing, RNAseq drills down into how genes are controlled, highlighting important mechanisms that can dictate a cell’s behavior.

These results provide for the first time an indication that Group 4 medulloblastoma tumors may arise from cells in the cerebellum called glutamatergic cerebellar nuclei and unipolar brush cells. This is a critical finding for future research into Group 4 medulloblastoma, because understanding the cell of origin may make it possible to develop accurate laboratory models.

Understanding the cell of origin

The study did not confirm a cell of origin for Group 3 medulloblastoma. However, the results did suggest several possible explanations. For example, Group 3 may arise from tissues outside the cerebellum which were not studied. It is also possible that the oncogene MYC, which characterizes Group 3, alters the cells to make them unrecognizable when compared to their origins. Future studies will focus on understanding more about the origins of Group 3.

“Group 3 and Group 4 medulloblastomas have confounded the field, with some very clearly belonging to one subtype or the other but another group exhibiting the hallmarks of both subtypes,” said co-senior author Mario Suva, M.D., Ph.D., of Massachusetts General Hospital and the Broad Institute of MIT and Harvard. “Now, we can more clearly see that there is an intermediate group, straddling Group 3 and Group 4 classification.”

By digging into the biology of intermediate Group3/4 medulloblastoma, the investigators showed these tumors consist of a mixture of immature and mature tumor cells, explaining current challenges associated with their classification. This unique biology may prompt investigators to think differently about how these tumors are stratified and may have implications for the design of future clinical trials. 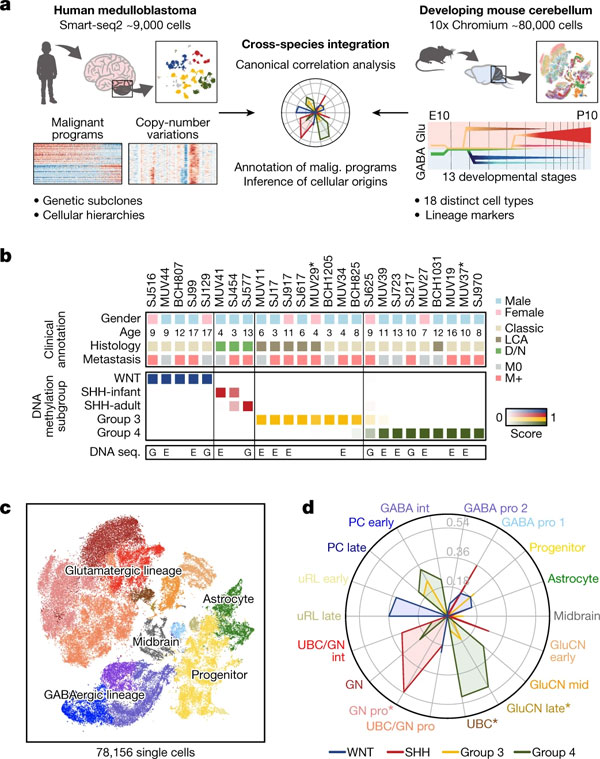 The study also confirmed that SHH tumors likely arise from cerebellar granule neuron progenitors. The findings advanced understanding of the ways that SHH tumors can differ based on the patient’s age. The investigators found that in infants, SHH tumors are largely differentiated, meaning the cells have already matured into their final cell type; whereas in adults, SHH tumors are more primitive and less differentiated. This difference may be tied to the increased number of genetic mutations present in adult tumors. The research also provided insights into WNT tumors, showing that WNT tumors can be subdivided into four distinct tumor cell populations based on gene expression profiles.