Scientists in Wisconsin have succeeded in growing three-dimensional brainlike tissue structures derived from human embryonic stem cells. Unlike previous miniature model brains, the new structures can be easily reproduced and they contain vascular cells and microglia, a type of immune cell.

These brain mimics may provide a fast, low cost way to screen drugs and chemicals for their ability to disrupt human brain development, the team reports (Proc. Natl. Acad. Sci. USA 2015). Current toxicity screening tests use multiple generations of rats and cost about $1 million to test one chemical, says Michael Schwartz, a biomedical engineer at the University of Wisconsin who was part of the research team. 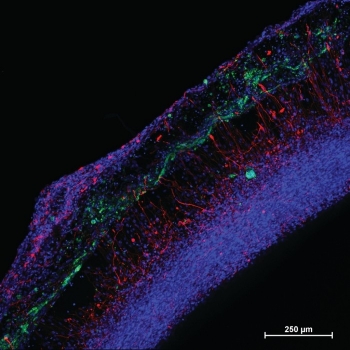 The researchers—from both the University of Wisconsin and Morgridge Institute for Research, in Madison—did not plan on creating the brainlike structures. They were surprised when they cultured neural progenitor cells on engineered hydrogels and the cells self-assembled. Neural progenitors are programmed to become specific brain cells, such as neurons and glia.

“We just wanted to have all the neural cell types in the same place,” Schwartz says of the team’s original plan to differentiate more cell types and combine them all together manually. Once they discovered that the neural progenitor cells can organize and grow into complex tissues by themselves, the researchers incorporated vascular and microglial cells into the structures, mimicking various cell types and cell-cell interactions in the developing human brain.

Little is known about the mechanisms involved in human brain development, so it is difficult to know whether a particular chemical disrupts any of those pathways, Schwartz notes.

To get around that problem, the researchers tested the response of their miniature brain models to a variety of chemicals, studying how the structures expressed 19,000 different genes. They collected RNA sequencing data from 240 replicate brain mimics, each exposed to 60 different chemicals—34 toxic and 26 nontoxic. The toxic chemicals included lead, arsenic, cadmium, and pharmaceuticals that target various cell functions. The data were used to build a model that can predict whether a chemical, such as a food additive, an environmental pollutant, or a drug, will affect a developing human brain.

The need to measure so many genes may limit the usefulness of the Wisconsin team’s tool for screening large numbers of chemicals, say scientists developing high-throughput screening tests at the Environmental Protection Agency. Longer term, if the costs associated with measuring RNA come down, or if researchers can determine how to achieve the same predictive power with only a subset of genes, “it would help fill a biological gap in EPA’s existing high-throughput screening battery,” says Russell Thomas, director of EPA’s National Center for Computational Toxicology.

“In the near term, the approach might be more valuable to identify pathways and mechanisms of toxicity,” adds William Murphy, a biomedical engineer at the University of Wisconsin, who led the Wisconsin team in developing the synthetic hydrogels. “We are gathering so much data on responses of these human brain mimics to known toxic chemicals that we can start to understand the signaling pathways affected by the chemicals,” he says. “Not just whether, but how the chemicals are affecting the developing human brain.”