A phenotype switch of a cell, or more formally, a cell state transition, is an elementary event in metazoan development. The associated phenotype change, e.g. cell differentiation, cell growth termination or artificial cell reprogramming, has traditionally been explained by molecular signaling pathways. This understanding has been extended to exhaustively characterizing cell states – defined by molecular profiles, such as transcriptomes or proteomes. However, the characterization of static molecular profiles cannot explain essential properties of the cell state dynamics, such as discreteness of states, stability of states, binary nature of cell transitions and the directionality of cell development. These properties emerge from nonlinear dynamics of the molecular regulatory networks involved, such as the gene regulatory network that governs cell state dynamics.

Only in the past decade has nonlinear dynamical systems theory entered the center stage in the study of cell state transitions with the renaissance of Waddington’s epigenetic landscape as a conceptual aid in stem cell and developmental biology. Waddington proposed a “landscape” to explain that cells differentiate into discrete, robust cell states. In his view, a marble, representing a cell, rolls down a hilly landscape towards a number of valleys and must eventually settle in one of them – each representing a particular cell type. This landscape is, as we will see,more than a metaphor but has a mathematical basis.

With the arrival of single-cell technologies we can in principle uncover the topography of the landscape by profiling individual cells in as many positions as possible. Technologies for monitoring single-cell states can be divided into two complementary types: measurement (i) of a large number of variable of a cell state (e.g. abundance of transcripts/proteins) as “snapshot” at a given time point in a large number of cells or (ii) of just a handful of variables continuously over time in the same cell and its descendants. The former destroys the cells during measurement, the latter keeps cells alive, allowing for longitudinal monitoring and providing information unique to biological systems, such as dependencies between mother and daughter cells. While the analysis of single developing cells has a over 100 year old history a, what is new is the massively parallel nature and the high-dimensionality: a large number of cells can be analyzed simultaneously for a large number of cellular variables. Thus, novel technologies are less about “single-cell”, but rather allow analyses of entire cell populations with single-cell resolution.

So far most analyses of single-cell profiles and longitudinal observations are agnostic of the formalism of dynamical systems that underlies the intuitive picture of the landscape. Although sometime Waddington’s landscape is invoked, current approaches almost exclusively focus on descriptive computational analysis for data visualization, dimension reduction, or statistical pattern identification. But now the time is ripe to move beyond collecting the data and correlating the data points, and to connect the dots: We need to unite the formal theory of dynamical systems that explains the uncovered patterns in single-cell data.  (read more…) 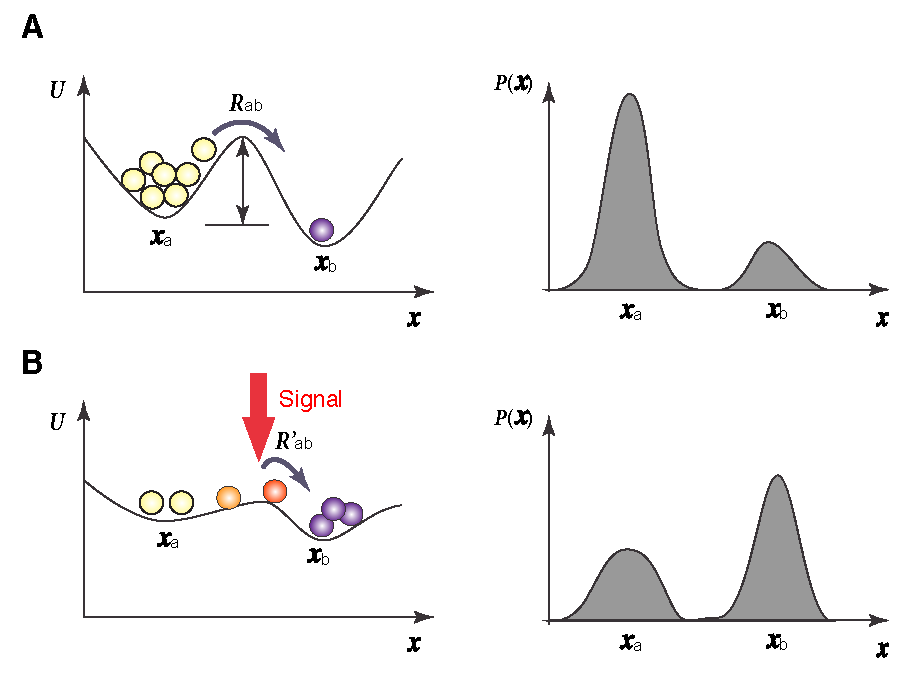 In (A) a bistable landscape exists with cells residing mainly in state xa❑ due to a high barrier to state xb❑ . In (B) cells transit to xb❑ , caused by the external signals that flatten the barrier.